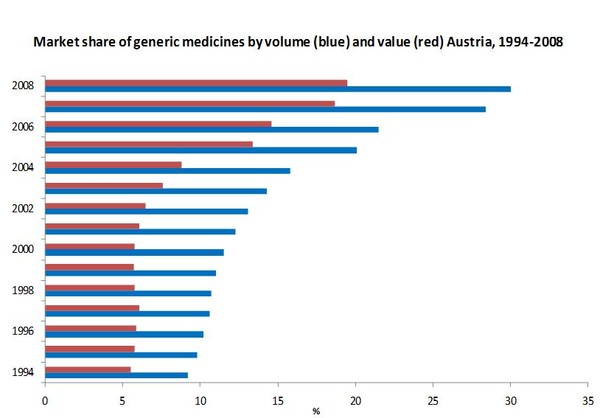 One of the reasons for the relatively low market share of generics is that neither voluntary nor obligatory generics substitution is allowed for pharmacists. There are no plans to introduce generic substitution in near future.

There are no financial incentives for patients to ask the physician to prescribe a generic drug, however, information campaigns to promote generics have been organised by the Austrian Generics Association (Österreichische Generikaverband, OEGV) in cooperation with the Main Association of Austrian Social Security Institutions (Hauptverband der österreichischen Sozialversicherunsträger, HVB) and by individual sickness funds [4].

Physicians in Austria are not allowed to prescribe by international non-proprietary name but have to use the brand name or the generic drug name [4].

Highlights of the generics market in Austria