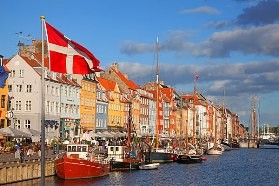 The current rules for substitution by pharmacists of generic for originator medicines in Denmark have contributed to Denmark having one of the largest markets for generic medicines in Europe [2]. In 2009 57% of prescriptions in Denmark were dispensed as generics, accounting for 23% of the market value [3].

In comparison with other Western European countries, Denmark is one of the countries spending somewhat more on health care as a whole, but relatively little on medicines. In 2008 Denmark spent 9.8% of its Gross Domestic Product (GDP) on health care, but only 7.3% of the total healthcare budget was spent on medicines [4, 5].

Investment in the pharmaceutical industry R & D in Denmark is one of the highest in Europe with Euros 150 per head of population being spent in 2002 [7].

Generics entry leads to large generics price decreases in Denmark. Average generics prices after just one year appear to be more than 50% below the price of the originator price prior to loss of exclusivity [9].

There are approximately 400 generic medicines approved by the Danish Medicines Agency (Lægemiddelstyrelsen, DKMA) [1] and sold in Denmark [10].

In Denmark, demand for generic medicines is driven by generics substitution by pharmacists [11].

Because pharmacists are obliged to dispense the cheapest variant of medicines, Denmark has some of the lowest generic medicine prices in Europe. Even when including expensive patented medicines, Danish medicine prices (exclusive of value added tax) are on average 7% lower than in other affluent EU countries. Prices on dispensed medicines have even fallen by 2.5% in 2007 and by 12% since 2003 [6].

The system of mandatory generics substitution seems to be very well accepted by patients. Nevertheless, patients have the option of refusing a generic drug without giving a reason [12].

Denmark has a rather fragmented pharmaceutical market and parallel imports in 2008 represented 16.5% in pharmacy market sales [8].

*A mature generics market is one where generics have been on the market for more than 10 years and where the market share of generics exceeds 40% [17].

16. ABPI. Did you know? Facts and figures about the pharmaceutical industry in the UK. [page on the Internet]. UK, ABPI [cited 2011 December 06]. Available from: www.abpi.org.uk/our-work/library/industry/Documents/Did%20you%20know_Jan11.pdf